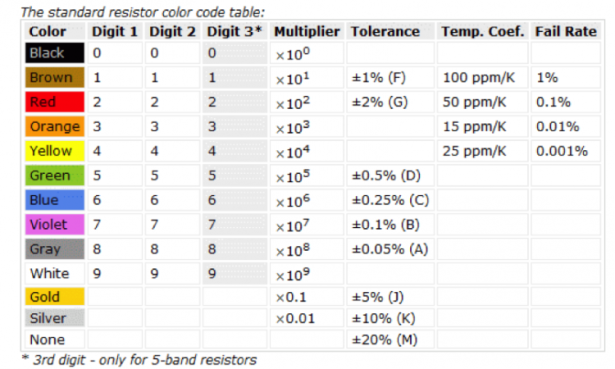 When I was working on the next version of Common Parts Library, I realized that it would be helpful to explain why you might pick one type of passive component over another. We started off by writing “How to Select a Capacitor” last month, and are following it up with a close look at resistors this month.

In this blog, we will explain all the different types of resistors, their merits and demerits, and popular applications. We have included some recommendations for commonly used resistor series with high supply chain availability from the Common Parts Library and Seeed Studio’s Open Parts Library, and have linked to pre-created search on Octopart.

Let’s dive into the world of resistors:

Resistors are two-terminal components used for limiting current, voltage division, and timing applications. Resistors complement ‘active’ components like op-amps, micro-controllers, or integrated circuits for variety of operations like biasing, filtering, and pulling up I/O lines. Variable resistors can be used to change the properties of a circuit. Current sensing resistors are  used to measure the current in a circuit. The unit of resistance is Ohms (Ω).

TYPES
There are several different types of resistors which differ by power rating, size, performance, and cost. Below are some of the common resistor types: chip SMD resistors, through-hole resistors, wirewound resistors, current sense resistors, thermistors, and potentiometers. We’ve also included their characteristics, applications, package information as well as info on part selection.

Chip surface-mount resistors provide a size advantage over through-hole resistors, so they are great for printed circuit boards (PCBs). Some of their common applications are pull-up/pull-down operations to ensure a signal is at valid logic level when external devices are removed, voltage divisions, current limiting, and filtering signals at certain frequencies in high-pass/low-pass/band-pass filters. You can use 0Ω resistors as jumpers to disable a sub-section of a circuit.

Through-Hole resistors in axial leaded packages are popular and widely used esp. while prototyping as they are easily replaceable and can be used with breadboards. They are used for pull-up/pull-down, voltage division, current limiting, and filtering like chip SMD resistors. There are various types of through-hole resistors. Carbon film and metal film are the most popular.

Metal film resistors have less variation in resistance value (0.1%-2%) and have higher stability. They are most commonly available in E48 (±2%), E96 ( ±1 %) and E192 (±0.5%, ±0.25% and ±0.1%) packages. Because they have better performance than carbon film resistors and are inexpensive, they are used in most applications. Their temperature coefficient (TC) is around ±100 ppm/K- some parts have positive TC while others have negative TC.

Carbon composition resistors were widely used in electronic devices fifty years ago, but because of their large variations and poor stability, they have been replaced by carbon or metal film resistors. However, they have good high frequency characteristics and are good at withstanding high energy pulses, and are still used today in welding equipment and high voltage power supplies.

Metal oxide resistors were the first alternatives to carbon composition resistors, but are being replaced by metal film resistors for most applications. They are still used for high endurance applications as they can handle higher temperatures and have higher power ratings (>1W).

Color codes are used to represent the values in through-hole resistors. You can use this Color Code Calculator to decode the color bands.

Wirewound resistors have high-resistance wire wrapped around an insulating core. They can provide very high power ratings (up to 1000W) and can operate at very high temperatures (up to 300 degrees C). They also have good long term stability —  a change of 15-50 ppm/year compared to metal film resistors, which have a change of 200-600 ppm/year. They are the best choice for noise performance followed by metal film resistors.

Disadvantages: They are only available in low ohmic range (0.1Ω to 100kΩ). Because the wire is wound to create resistance, they have their own inductance, so they have the worst high frequency properties among all resistor types. They are also more expensive than other common types of resistors.

Applications: They are commonly used in circuit breakers and as fuses because of their high power capabilities.

Current sense resistors, also referred to as ‘shunt’ resistors, are used to monitor currents in a circuit by translating them into voltage drops that can be easily measured. They are low-resistance resistors with higher power ratings to handle large currents. One of their applications is current limiting with stepper motor driver chips.

Most current sense resistors have either two or four terminals. In the four terminal version, which is also called a Kelvin configuration, current is applied at two opposite terminals and voltage is sensed across the other two terminals. This configuration reduces the effect of temperature dependence on resistance and greatly improves stability of the sense circuit. It is used for applications that require high accuracy and temperature stability.

Thermistors are resistors whose resistance changes significantly with a change in temperature.

Use NTC thermistors when you need a change in resistance over a wide range of temperatures. Their resistance decreases with temperature, and they are good choices for temperature sensors between -55C and 200C.

For More Details: How to Select a Resistor