RaspiTrap is an animal friendly mousetrap, with photo, video and email function. You may ask, why somebody would build such a mousetrap? Why not?

Easy, the mouse enters the trap. Passes the light barrier. Raspberry detects and activates servo motor. Door closes. Now the Pi takes a Pic and sends it via IM and Mail. That’s it. 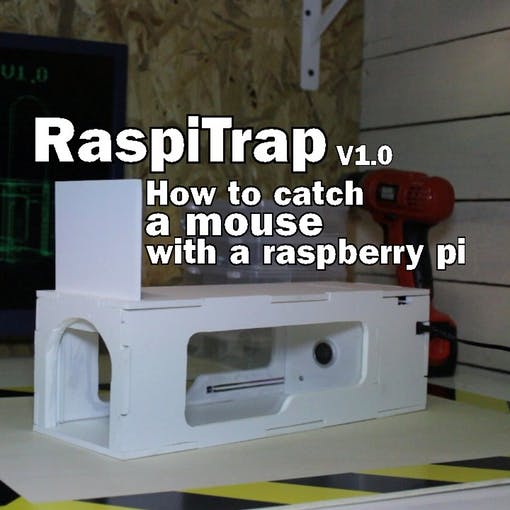 First of all I tried the design in Sketchup 8, which is still free. I could try a few designs virtually to see if everything fits.

To detect if a mouse is inside, I made an infrared barrier. It was build on a breadboard for testing. I was too lazy to make my own PCB, so I ordered it from China. It took one week and the result is stunning. I wanted to use an external power supply for it, but decided later to use the 5V from the Raspberry Pi.

I used a cheap fish eye lens to mount in front of the Pi camera. For mobile phones these lenses are fine, because the phones have an auto focus. The Pi camera has a fixed focus so that makes the picture blurry. I will try to change the focus on the Pi camera in the future.

To fix the IR sensors TEMIC K153P inside the trap, I manually milled two grooves. They were placed behind the 3mm acrylic glass plates. As you can see, the 9gr. servo motor is already mounted.

At the back side you will find the Raspberry Pi, the servo motor and then PCB for the Infrared barrier. The release mechanism on the left side is a thin piece of PVC. It is connected over a thin metal bar with the servo motor. Behind the servo is an end switch. This one detects, when the trap was released.

Inside the trap is white LED. It shows me the status of the mousetrap and it is used as flashlight to take the pictures. The Raspberry runs on Archlinux.

How to Select a Resistor

When I was working on the next version of Common Parts Library, I realized that it would be helpful to...