“Hello World!” – This is likely the output of the first program you ever wrote when learning how to code. Setting up a device to stream temperature data is quickly becoming the de facto Internet of Things (IoT) “Hello World!” project. If printing “Hello World!” the first time was a long, frustrating task, you might have never written another program. Your first IoT project should only put a big ol’ smile on your face. This fun, easy project will introduce you to the wonderful world of IoT data streaming.

A video tutorial of this entire project can be found at:

Here are the supplies you will need:

The DS18B20 temperature sensor works well with the Raspberry Pi because it has a digital output, and the Pi has no on-board analog to digital convertors (ADC). Raspbian includes an interface to read the output of the sensor. We just have to write a little code to grab and parse out the temperature. Adafruit has a great tutorial here for using the DS18B20 that we are simply going to follow and modify to stream the temperature instead of just outputting it to the screen.

The hardware setup is simple. DS18B20 red wire to 3.3V. Black wire to GND. Blue wire to a pull-up resistor and to GPIO pin 4 of your Pi.

To start the temperature sensor read interface we need to run two commands. Go to a command prompt on your Pi or SSH into your Pi. Type the following commands:

The output of your temperature sensor is now being written to a file on your Pi. To find that file,
cd /sys/bus/w1/devices

The number after “t=” is the number we want. This is the temperature in 1/1000 degrees Celsius (in the example above, the temperature is 26.125 C). We just need a simple program that reads this file and parses out that number. Lucky for us, Adafruit already created a Python script for us that does just this and outputs the temperature to the screen. Create a new file on your Pi (e.g. temperature.py) and copy-paste the following code in:

Run this script (“sudo python temperature.py”) to see the output of your temperature sensor on the screen. 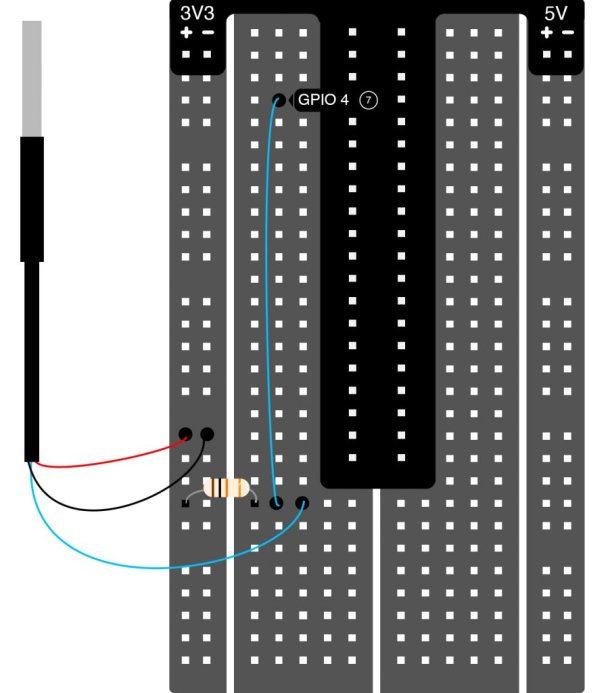 You will need to copy+paste the client key associated with your Initial State account in between the quotes on line 6 where it says client_key = “”. You can find your client key under your account settings or on the landing page once you log into your account.

These are the modifications we just made:

1. The circuit description This circuit is consist of the STC89C52 minimum main system and 32 colorful LED display components. It uses...