ITEAD studio is based in Shenzhen, China, which is located with China’s biggest electronics market as well as one of the most integrated electronic supply chains in the world. A vast number of exciting and innovative products are designed, sourced and manufactured around us every day.

In electronics the big picture is usually more compelling than the nuts and bolts of electronic design. To make innovation easier, we offer various modules and development platforms to accelerate the development process and to reduce barriers to entry and to soften those steep learning curves.

You can visit our site for more our products: imall.iteadstudio.com

We got some reply from the forum post , readers were confused between CORE and Baseboard, and don’t know what they will get form the perks. 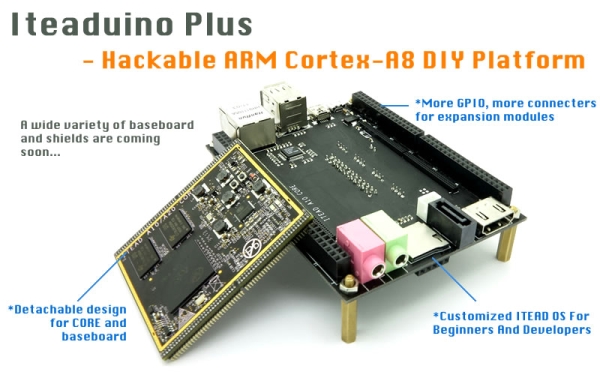 1.Every Perks includes a Iteaduino Plus (Basebaord + CORE board), and other accessories that refereed in the perks description.

3. The final product come with standoffs, and well protected in BOX

4. The Rich package and Advance Package will come with 5V 2A power adapter which not mention in the perk discription

5. It’s a Flexible Funding, so no matter whether it reach the 20,000 goal, we will ship out the Perks to you – but if it can reach, there will be some little surprise in your package, like Micro-SD card reader or so.

Here I would like to introduce a new product – Iteaduino Plus. This development kit adopts ITEAD A10 CORE, you can use it as a cost-effective single-board computer, the performance of which is more powerful than Raspberry Pi which now popular around the world：

You may not find anything special by only seeing the configuration and parameters above, and you may consider it similar to other low-cost single-board computers, then let me tell you the special features of this board which are quite different from other products:

We innovatively integrate main control, memory and power supply circuit into design of a CORE board, and the entire system can run up only with a stable 5V power supply. There are simple pin breakouts on the baseboard, a variety of interfaces can be expanded into sockets. As a result,after you have completed your development with Iteaduino Plus, you can design a dedicated baseboard for the CORE according to your needs and then apply it to your project.

The CORE module integrates an ARM Cortex-A8 core processor, 1G DDR3 SRRAM with power circuit of the entire system- including lithium battery charging circuit. Pins of A10 chip are expanded to the both sides of the module, users can use the core board directly as a module or CPU. The design of baseboard isquite simple, you only need to break out the pins to the corresponding socket or connect them to the corresponding circuit without need for design of complex multiple high-speed circuit board.

As an evaluation board for ITEAD A10 CORE, the baseboard breaks out all common interfaces, such as HDMI, USB, Micro-SD, RJ45 Ethernet and audio input and output, etc. Connect the HDMI to monitor, USB to mouse and keyboard, connect to the router through the network cable, plug with Micro-SD card with ITEAD OS, then connect to the power supply, you can use it as a linux server.

In addition to those commonly-used standard interfaces mentioned above, more pins on the core are expanded to both sides of Iteaduino Plus baseboard for 2.54mm pitched pins. For pin diagram,

In addition to those commonly-used standard interfaces mentioned above, more pins on the core are expanded to both sides of Iteaduino Plus baseboard for 2.54mm pitched pins. For pin diagram,

If you only take Iteaduino Plus as a low-cost single-board computer to browse the webpage, write documents and set up servers, etc., you will be wasting our efforts made on expanding so many hardware pins.

We customized a set of Ubuntu distribution, named ITEAD OS, for Iteaduino Plus, in which we integrated driver needed for the underlying operations and provided simple operation functions for the upper layer.

We want to offer simple operations like Arduino, so that users can operate bus interfaces directly, such as GPIO, UART, IIC and SPI. In addition, we will continue to port more libraries to this distribution in the future, thus you can directly manipulate various shields and modules offered by ITEAD without writing about the underlying operations. For example, you can use function below to make a call directly

We have released a BETA version of ITEAD OS, the official version will be released after the completion of our funding together with the latest hardware. 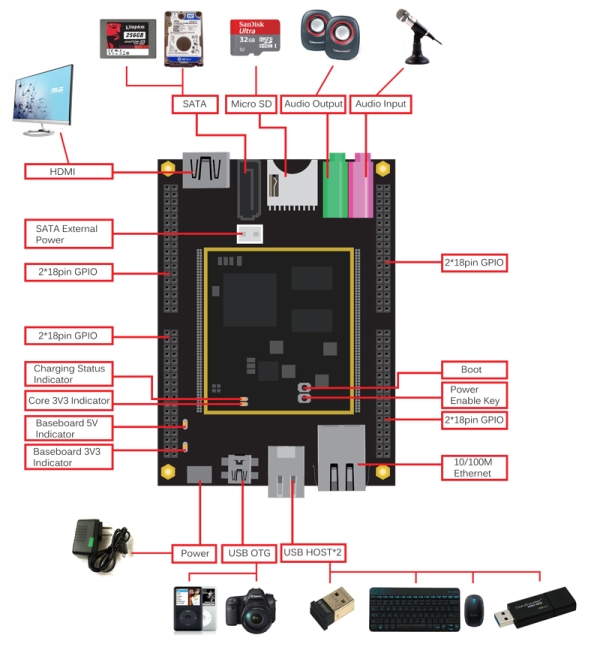 ITEAD OS is a minimum operating system modified based on Ubuntu customization including but not limited to customizations of the original system as follows:

Currently, we have already customized a shield named Iteaduino PLUS Arduino PLUG for Iteaduino PLUS. It offers interfaces compatible with Arduino, thus all Arduino-compatible shields can be used on it. Besides, it also provides Grove interfaces which can be connected to a variety of electronic brick modules and a header compatible with 26-pin GPIO interface of Raspberry Pi, so a variety of shields customized for Raspberry Pi can also be used on it. 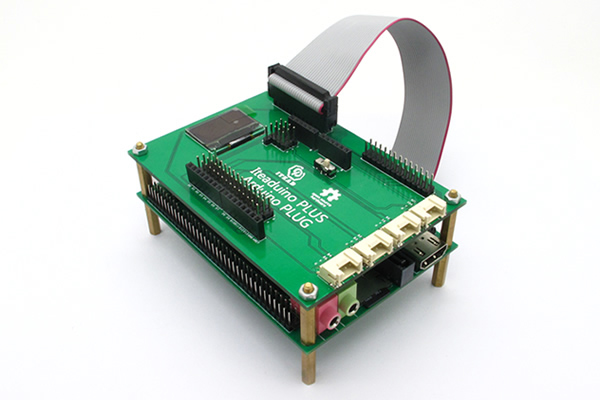 In the future, we will continue to release a variety of shields for different industry applications, such as the servo control board and video acquisition board, etc. Moreover, faster and more powerful core boards are also coming. Please be relieved that all of these boards will be compatible with one another to avoid repeated purchasing. Let’s just imagine that, in the future, you can directly upgrade the system from single core to dual core or even quad core only by replacing a core board, how cool it is! 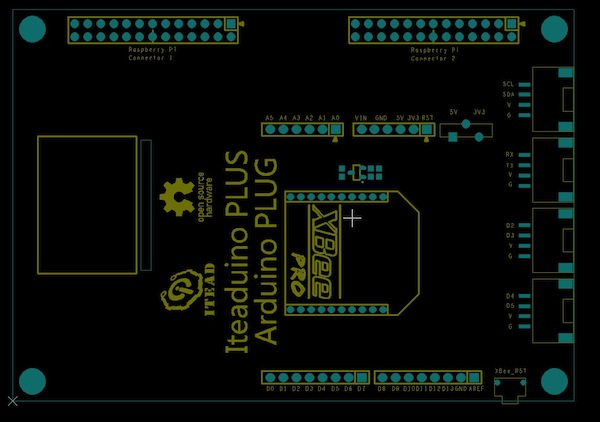 It can be used to breakout the pins of Iteaduino Plus as Arduino footprint, so you can connect Arduino shields to the Iteaduino Plus with this adapter. And this plug offer an OLED display, when you use the ITEAD OS, it will show you the IP address, CUP and RAM Occupancy of the Iteaduino Plus.

It can be most of Internet of things applications. Like IR repeat, 433MHz/315MHz RF repeat, zigbee repeat and so on.

Protect you not to touch the solder joint on board. One bottom and one top, with 8 standoffs and 4 nuts, so compatible with one more plug.

It will come with the Rich or Advanced package , even though we didn’t mention it in perk.

(The final product will not 100% the same this beta prototype) 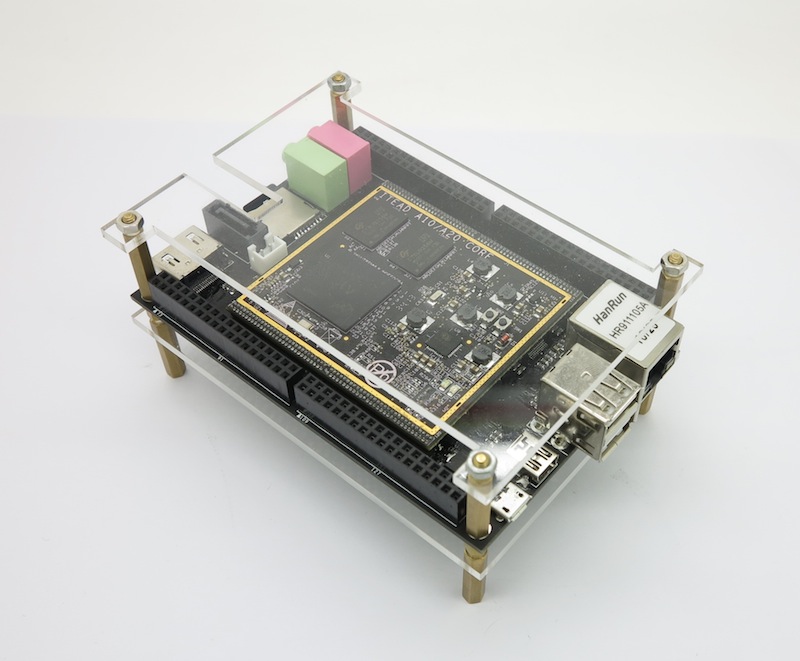 Before I started working for Pelagicore I won two Raspberry Pi's (short RP) which they sponsored. One because I was...