The speed of light in vacuum is a well-known universal constant and is considered to be the nature’s ultimate speed limit. No matter, energy, and information can travel faster than this speed. The speed of light has always been a topic of great interest and significance throughout history. In the course of measuring the speed of light, scientists have explored numerous ingenious approaches from analyzing the motion of heavenly bodies to artificial quantitative measurements in the laboratory. Michael Gallant describes a very simple approach of measuring this physical constant using an infrared LED, a photodiode circuit, and an oscilloscope. The premise of this method is to allow an infrared beam to travel different distances and then compute the time delay (Δt) between them using the oscilloscope. By measuring the difference in the distances (Δd), the speed of light can be calculated as the ratio of Δd and Δt. 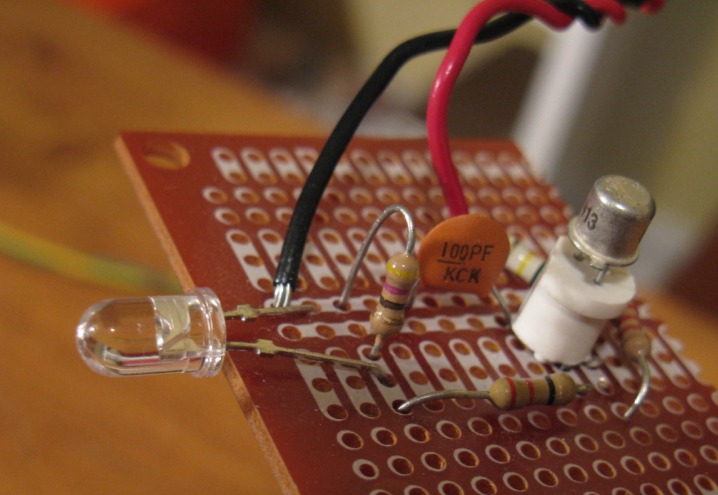 The following diagram describes the setup he used. A Vishay 870 nm IR LED (TSFF5210) generates an IR pulse beam that splits into two beams (L1a and L0) through a beamsplitter (BS). L0 is directly focused onto the photodiode (Pd) using a lens. The L1a beam gets reflected off a mirror, travels along the path L1b, and then focused using a different lens onto the same photodiode. You can see the net path difference between the two beams before they hit the photodiode is (L1a+L1b – L0). If the original IR pulse is kept adequately short, the two optical pulses detected by the photodiode will not overlap in time. An oscilloscope of sufficient bandwidth can therefore reveal the time difference between the two pulses. The photodetector used in this setup was Vishay BPV10 high speed Si pin type with a bandwidth of 200 MHz. The photodiode signal is amplified using an AD8001 Opamp based preamplifier circuit with a gain of 35 (31 dB) and BW of 50 MHz.

Read more: Measuring the speed of light with electronics