I have been working with the Raspberry Pi for a few months and have had a great time experimenting.I plan on documenting some of the things that I have been able to do and observations that I have made.

I have also been working on a Temperature / Humidity grapher – notes re here:

http://www.trainelectronics.com/RaspberryPi/Graph_Humidity/
Easy Case
I made a protective Plexiglas case using materials that I found at my local (well stocked) hardware store.Two pieces of 1/4″ Plexiglas are held apart by 3/4″ spacers (stand offs).  The Plexiglas is 4.5″ x 3″.

There are three nylon screws that go through tapped holes in the top piece of Plexiglas to put gentle pressure on three points on the board, holding it firmly in place.  The screws are 6 x 32 and 1″ long.  The screws that goes onto the yellow video out connector is way too long and will be cut down in length.

If you can’t find nylon screws locally I purchased 8-32 x 1″ screws from MicroFasteners.com 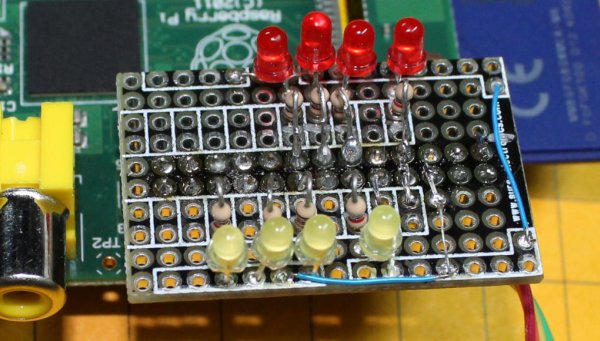 A small piece of 1/8″ thick gasket material (2″ x 1.75″) goes under the side of the board away from the SD car socket.  This padding helps to level out the bottom and it keeps the board from moving.  The gasket material was found in the plumbing department.  Make sure you test it to make sure that it DOES NOT conduct electricity before using it!  The material I found is rubber and works well.  It is similar to this item from Sears.

A slot can be cut into the top piece of Plexiglas it access to the I/O pins is needed.
If you look carefully at the spacers in this photo you will note that the screws are not fully tightened but there is a small space between the stand off and the Plexiglas.  A small washer will be added to fill this space.

Using the Pi to Communicate with a Pic (or PICAXE) Microcontroller
The serial port on the Raspberry Pi can be used to send data strings (text and/or data) to other devices.  The objective of this project is to get the Pi to send meaningful data to a Pic or PICAXE processor.

Connect the UART pins from the Pi to you computer’s serial port using the MAX3232 described below.

To send a serial string from the Pi’s command line type the following:

To send with a carriage return and line feed:

Modification to Shell file to Send Serial
I modified the shell script that was shared here:  http://www.instructables.com/id/Web-Control-of-Raspberry-Pi-GPIO/?ALLSTEPS so that it would output serial data via the UART that I could receive with a PIC or PICAXE so that the web input would control the microcontroller to do stuff!

Here are the changes I made:

PICAXE 14M2 Program
This is the test program that successfully picks up data from the Pi and sends it back out to a terminal program
SYMBOL SerialIn =c.0 ‘pin 7 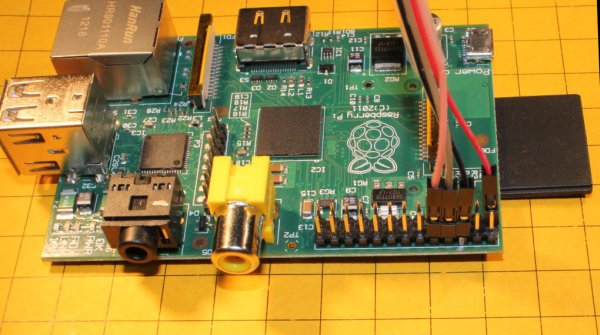 Using the Pi to Control a Web Cam System
I have been using a four camera web cam system for some years.  You can view the live video here.  The board that switches between cameras was originally designed to be operated by using four switches to select one or all of the cameras and a potentiometer to select the time that each camera would be active.  The project was featured in Make Magazine, Issue 30 in the Spring of 2012.  This article can be viewed here:  http://www.trainelectronics.com/WebCam/Article.htm

The objective of this project is to use the Raspberry Pi, and its web interface, to select cameras and time delay.  The project uses a number of routines and programs that have been written about using the Pi.  My hat is off to all of those contributors who made this work possible!

The in-line header is also from Sure.  It can easily be cut into two thirteen pin strips for our board.

LEDs and 1K resistors were added to each I/O pin.  Note that the far left and far right sets of holes are connected to ground.

USB 3.0—Everything you need to know

USB 3.0—Everything you need to know In the last 14 years, the Universal Serial Bus (USB) has become the standard...