Maybe this is the most upgraded and functionally versatile device among the weather station circuits I made before.

It can display high-quality photograph images on a wide LCD screen (5 inches). Also, it can show important weather information, and date/time on the LCD screen while enjoying the high-quality photo images. 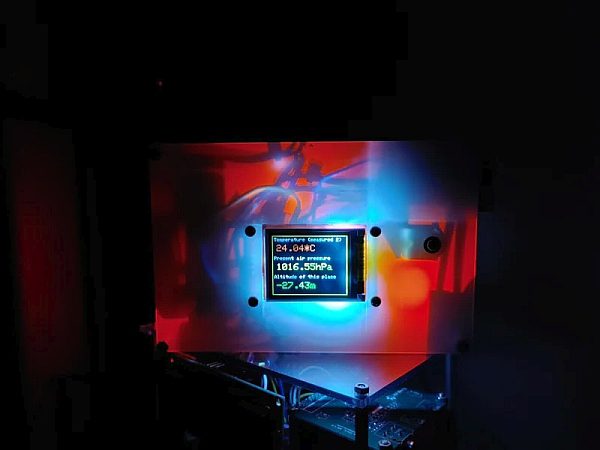 About five different types of weather station circuits were made until now using 16×2 Dot-matrix LCD, 1.8 inch TFT, and 3.5 and 5 inches LCD.

As the display module size become bigger, the digital photo album function is integrated together for showing more versatile and enjoyable images.

You can see the previous weather circuits in the photo images above.

The first circuit is made with Arduino pro-mini and 1.8 inch TFT display.

As the DS3231 RTC and SD card break-out modules are used, it showed a one-year weather change trend across four seasons in Korea.

– As the internal flash memory of Arduino pro-mini is just 32KB, storing programs of the weather station and image album was quite difficult

– The 1.8-inch size display was so small for showing high-quality photo images on the LCD

The second circuit is made by using Arduino Mega2560 and 3.5 inch LCD module.

It operating for about six months and usually, I checked the time in the morning before leaving home to catch the bus going office.

But this circuit also has the following disadvantages.

– As the Chinese 3.5 inch, LCD manufacturer does not provide a compatible device driver, interfacing the display with Mega2560 was very difficult

– Also, the LCD manufacturer only supports a primitive image handling library, BMP file image was distorted when the resolution is not exactly 480×640 dpi

But the new device using RPI Zero and a 5-inch LCD module can remedy all previous problems due to the following reasons.

– Because RPI and 5 inch LCD are connected with HDMI interface, I can utilize standard python graphic library and Tkinter X-windows application program

– RPI using time clock synchronization via NTP (Network Time Protocol), no additional RTC module (DS3231) is not necessary (But the RPI should be connected with wireless AP for receiving NTP time synchronization data) 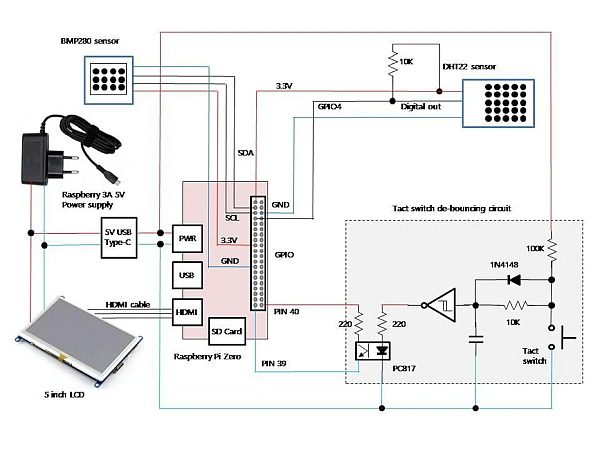 Although RPI is used, overall schematics is almost similar to the Arduino weather station circuit.

As mentioned above, the DS3231 RTC module is not necessary as RPI uses NTP for time data synchronization.

But you need a wireless connection to your home AP (Access Point) which connects to the internet and receives clock synchronization data from a level 0 clock source within the internet.

Because I’m interested in humidity, temperature, and air pressure of weather data, the DHT22 and BMP280 sensors are connected to RPI.

As both sensors are operating at 3.3 volts, two RPI Zero 3.3V power supply pins are used for connecting these sensors.

The 5-inch LCD module requires a 5V power supply for operation and an HDMI interface is needed for connection with RPI.

But you don’t need such a complex circuit for your own project.

The followings are the reasons why I’m using such a complex circuit for simple tact switch input capturing.

– As the RPI GPIO pin operating at a 3.3V level, I want completely isolate the de-bouncing circuit (Operating at 5V) from RPI by using an optocoupler (PC817)

The de-bouncing circuit only produces a single shoot of a pulse by the operational characteristic of the Schmitt−Trigger Inverter gate.

The tact switch is used to shut down the RPI or delete the image file displayed on the LCD. (I’ll explain in detail at a later step when I’m explaining the python program) 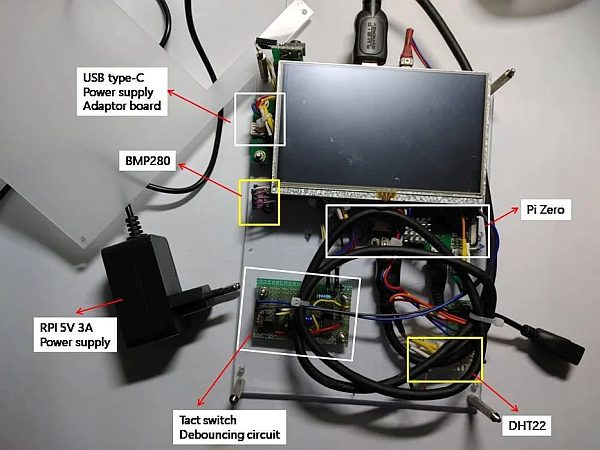 As the HDMI cable should be connected between the 5-inch LCD and RPI, the bulky cable needs to be housed inside the enclosure.

This cable hides several key parts of the digital album and weather station circuit in the photo above.

Anyway, the followings are major parts of making this circuit.

As a 7×24 operation is required, the heatsink should be mounted on the RPI zero CPU.

Let’s look at more detail of the circuit and how these parts are interconnected, configured, and assembled from the step below. 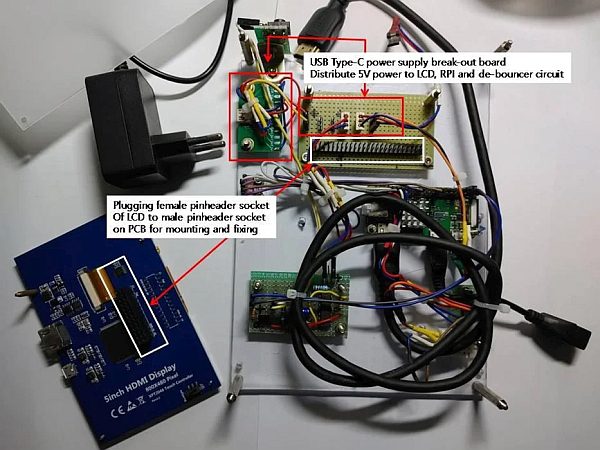 The first difficulty is how to mount and firmly fix a bulky 5-inch LCD on an acrylic board.

As a female pin header block is included in the 5-inch LCD module, these pin header sockets can be used for mounting and fixing LCD on acrylic board.

As HDMI cable is used for interfacing LCD to RPI, I don’t need to use female pin headers of LCD module. (Therefore, no electrical connection should be made between pin header sockets)

I had bought 5V 3A power supply when using RPI 3B and 3B+ before.

I’ll explain in detail the connection method of the sensor with RPI in the step below. 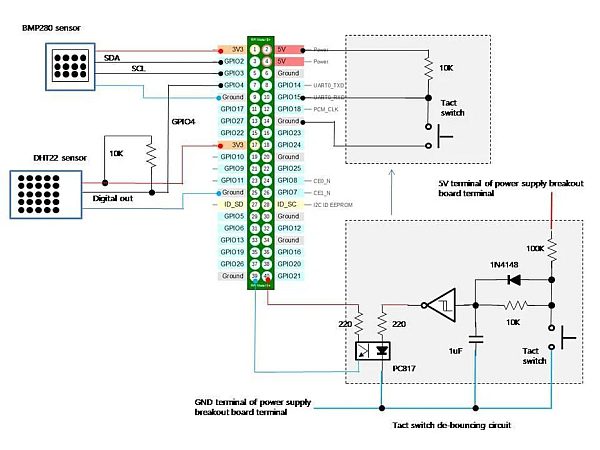 I had connected DHT22 and BMP280 sensors several times to Arduino until now.

But connecting those sensors to RPI is the first time with this project.

As hardware wiring is much straight forward and simple, I’ll not explain in detail about that.

But software installation and configuration are a little bit different.

However, the overall method is very similar between Arduino IDE and RPI python library installation.

You need to install DHT22 and BMP280 python libraries with the following commands.

I’m assuming you use “python version 3” for making the digital album and weather station program.

For the tact de-bouncing circuit, you can replace this circuit portion with a simple 10K resistor and tact switch wiring method which is well explained on many web pages.

Why I’m using this circuit is that I had experienced several times with switch chattering problems while programming with python.

But as a result conventional 10K resistor and tact switch wiring method can support the required functionality very well.

Therefore, I’ll not explain in detail about this circuit part. 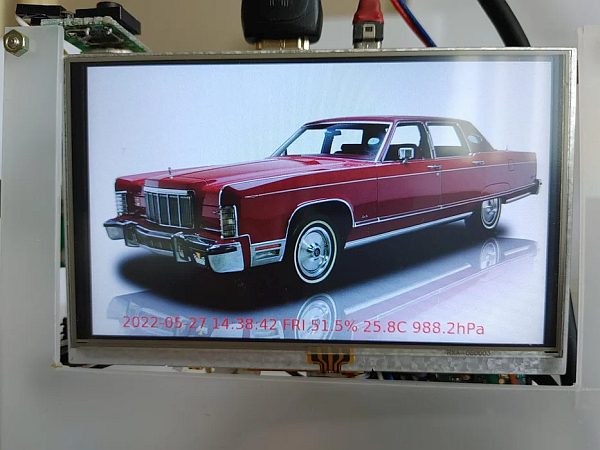 Before looking at the python program, I’ll explain several things about RPI OS configuration and installation of required python libraries.

The RPI OS usually turns off the X-windows screen when no input is available for several minutes (5~10 minutes).

For turning the X-windows screen (Therefore 5-inch LCD display) all the time, the following configuration is necessary.

When the above parameters are configured, the X-windows screen never becomes blank (therefore not turning off the screen).

When RPI Zero is turned on, the digital album and weather station python program should be started automatically.

Therefore, the following configuration should be applied to “.bashrc” file in /home/pi.

(Insert the commend at the last line of .bashrc) sh +x /home/pi/view.sh

The side-effect of using “.bashrc” is that you can’t access to shell prompt as the python program is automatically running.

Therefore, you should add an additional user such as “test” by using the “adduser” command.

Also, you need to change the root password for shutdown RPI when you connect the RPI using a remote terminal application such as Putty.

When you install RPI OS with X-windows desktop (default installation option), the “Tkinter” X-windows library is installed as default.

Therefore, you don’t necessary to install any X-windows-related libraries.

But as I display JPEG images on canvas, the following additional library should be installed

When the RPI OS configuration is finished like above, we are ready to make a python program which will be explained in the step next. 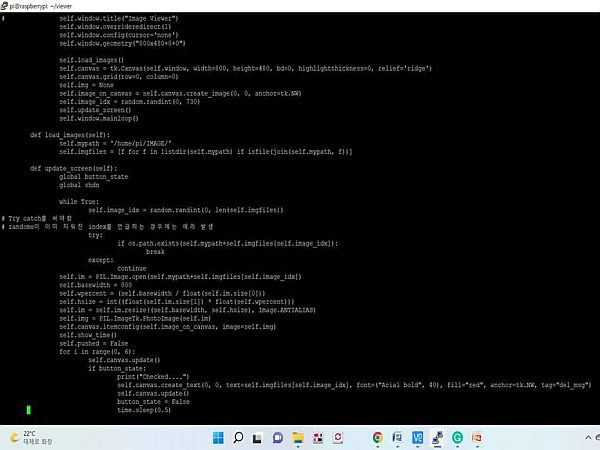 The most difficult part of this project is not hardware wiring and configuration.

Rather making an X-windows-based python program is the hardest part for me.

As I get used to making procedural python programs, the MVC (Model-View-Controller) based X-windows programming is a kind of challenge.

Still, I’m struggling to get used to the MVC-based programming style.

Therefore, I searched for a sample X-windows program code that shows JPEG images on the Internet.

Afterward, I modified the sample program to suit my requirements for making the digital album and weather station application.

The first difficulty I faced is MVC needs external events (such as mouse click or entering keyboard and so on) for activating certain parts of the program.

But my application needs to run by itself (Showing images and displaying weather data continually) without any intervention.

Therefore the following code is included in the application code.

Per every 3 seconds, main window updating (call windows-updating code itself) is performed for showing images and displaying weather data continually.

I don’t think my code is a good example as I only focused on the code just running anyway without applying any program optimizations.

You can see the program code in the file attached to this step.

Actually, a single object (ImageViwer) encapsulates all required functionalities like below.

– When the tact switch is pushed program automatically shutdown RPI

– Although the JPEG file deleting function is included, it is not used as the switch is utilized for shutdown RPI

– Along with the JPEG image, date/time and weather data (humidity, temperature, air pressure) are displayed and stored in the log file

Originally the tact switch is added to delete the unwanted image that is displayed on the LCD.

Please look at the code in the file below for more detail about the python program. 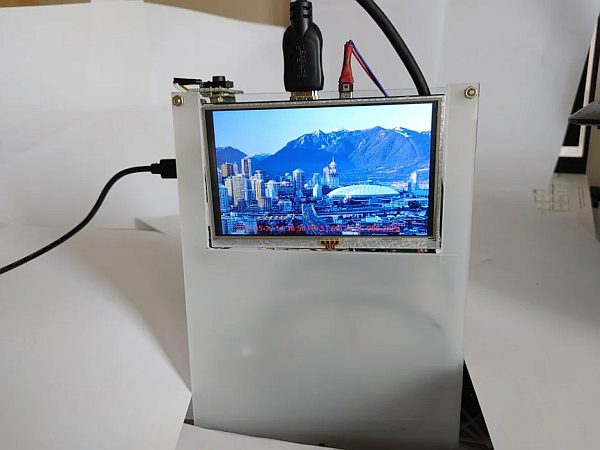 As the conclusion of this RPI project, you can see the digital album and weather station operation captured as video in the link below.

Sometimes red-colored date/time/weather data string can’t be seen if the bottom side of the JPEG image background color is reddish.

But soon or later, you can see the text message when other JPEG images are displayed on LCD.

Thank you for reading this project story…..

When my 5-year-old son started showing an interest in Space and Planets, I was prompted to start building him a...