I’ve just been given a new Raspberry Pi.

It is my 10th Pi and my first mark 2 board, the Raspberry Pi that is claimed to be 6 times faster than a B+.

So it is time to check it out and also measure the current drain using the same test conditions that I’ve used for my other models.

What exactly is it?

On the RaspberryPi forum it is commonly called a Pi2, but I hope to future-proof this post by referring to it as the Pi B2. This is because I’m half expecting there to be a Pi A2 at some stage.

Having the same foot-print as the B+, the Pi B2 has twice as much memory as the B+ (512MB > 1GB) and uses a quad core ARMv7 Broadcom cpu. The change to ARMv7 should open the door to a wider range of Linux distributions. And of course Microsoft dont want to be ‘on the outside looking in’ any longer, so are planning to do something with Windows 10 (…I’m truly underwhelmed).

It is certainly noticeably quicker for every operation from sudo apt-get upgrade to running the web browser. And running Gambas 3.5.4 on Jessie it is not only faster to load and more responsive, but the Task Manager cpu% not longer rises to 100%. If fact the little graph just seems to dribble along with a short peak of maybe 20%. 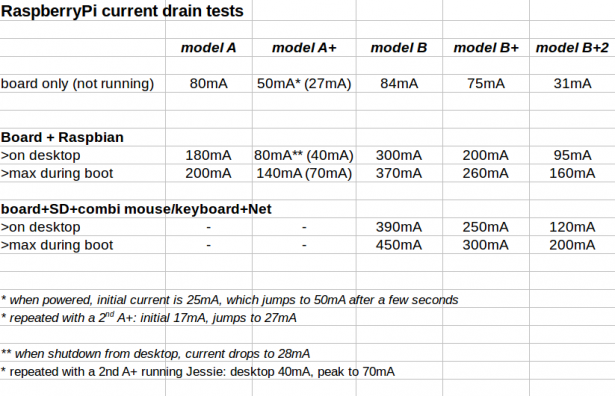 What will I use it for

As I currently have just the one, I will probably use it as the default development board, especially for writing, editing and building Gambas applications.

On the other hand, my eldest granddaughter is just about ready to move on to more complicated games. So maybe KiddiePi could do with an upgrade. It would be good to run GCompris, if someone can get it running properly.

I repeated the very basic current drain checks to determine how the models compare.

Note that these are not absolute indications of power consumption, but an attempt to show some relative figures for comparison between Pi models/versions.

When I did the original checks on the A+ I was puzzled by the jump in current just a few seconds after power was applied to the bare board (i.e. no SD fitted). So I just repeated the test on a different A+ board. I still get the jump in current from the initial value, but the final values are much lower than they were for the 1st board.

For more detail: The RaspberryPi model B+ mark 2