The Museum of Computing in Swindon has a working Teletype and a desire to get it to print out tweets as part of a display in the museum. Since the Swindon Hackspace is based in the museum it was a perfect project for hackspace members.

The teletype uses a current loop interface to communicate with other (teletype) devices. The current loop interface is similar to a standard RS232 serial interface found on a PC except rather than using changes in voltage to represent 0’s and 1’s it uses changes in current. Data is sent at 110 baud – very slowly compared to modern standards, but this is as fast as the teletype can print characters and it has no means to buffer the data it receives. 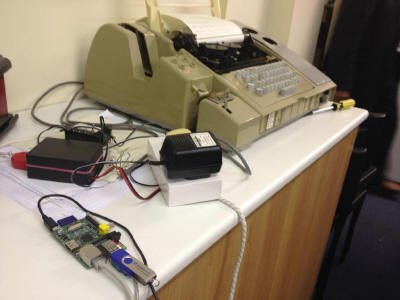 After a few failed attempts and fried components a circuit was built to convert from RS232 serial into current loop using…. [ what?, circuit diagram?, any more info? ]

The teletype also uses a slightly different character set to standard ASCII so a character set conversion was required. This conversion implemented in the C# code running on the Raspberry Pi. This also allowed for use of some of the mechanical functions of the teletype such as the bell which you can hear ring as the teletype prints out a tweet

The teletype is mainly a mechanical device and contains only a single circuit board consisting of a few resistors, diodes and transistors photo required Many of the hardest problems to overcome turned out to be mechanical rather than electronic or software problems.

Upon initially managing to send data to the teletype over and RS232 port and via the current loop converter many characters were being printed out incorrectly. 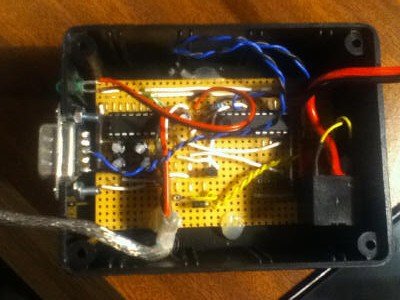 After reading the teletype manuals found online it was discovered that there was a mechanical adjustment lever at the back of the teletype which controlled the alignment of some cogs used in decoding the character data sent over the current loop. After a few minor adjustments with this lever most characters now print correctly.

You may notice that the teletype still occasionally prints the wrong character. This is down to mechanical issues rather than any software or electronic fault and is simply due to the age of the machine and worn mechanical components.

I wanted a decent size portable display for my Raspberry Pi's that I could easily pack up and take to...