This project is aimed to design a ‘Sleep and Wake-up Assistant’. Different from a normal alarm clocks which can only make noise, this alarm clock is designed to wake up a person in a comfortable and effective way by involving sound, light stimulation, motion detection and vibration. The functions of this alarm system are:

( i ). This system has an LED light. Before the user sleep in the night, the LED can be used as a reading light. The lightness is adjustable and can be timed to gradually dimmed as the user falling asleep. In the morning, the lightness will be gradually increased before the set wake up time (e.g. 30mins ahead) to simulate the sunrise.

( ii ). An accelerometer will be put on the bed or under the pillow to monitor the moving pattern of the user before wake him/her up. There will be a window before the user’s set alarm time, once the system considers that the user is in a light sleep phase, it will wake the user up even before the set time.

( iii ). To help the user wake up effectively, a vibrate motor will be placed under the pillow. It will start working when the alarm start.

( iv ). This alarm clock has a more active ‘Snooze’ mode comparing to a normal alarm clock can just timing. After the setting alarm time has passed, the accelerometer will keep detecting if the user is still on bed by tracking is there any movement.

( v ). Sometimes, people may wake up late and found out the missed a very important event. If someone told them while waking them up, it would be much likely that they can get up in time. This system allows the user recording a few sentences and use it as alarm sound. For example: “Wake up! You have an exam at 9 am!”

( vi ). The situation of a short nap is also considered when designing the system. When the user set the alarm time to be within only 2 hours later, the system will only simply wake up the user at the set time.

According to the instruction of the sleep cycle , people’s sleep has cycles of sleep states and each cycle last about 90 mins. For each cycle, it can be divided into 4 states: light sleep, deep sleep and dream state. To get the accurate results and patterns of each sleep states would require relevant medical research, which is not realistic for this course project. As a result, in this project, it is coarsely assumed that, the pattern of light sleep is moving at least 20 times during 30 mins before set alarm time. 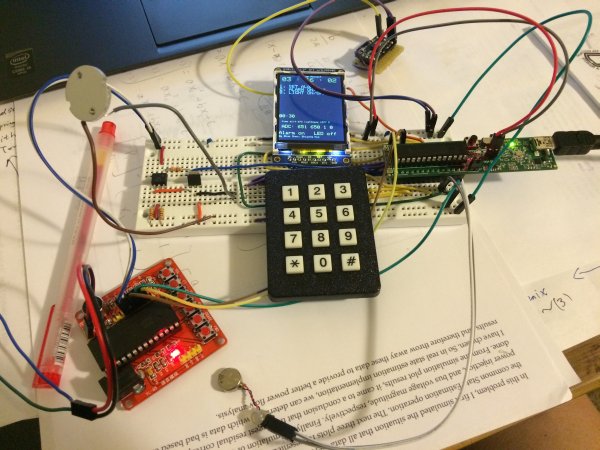 On Philips-store, they describe using light as a simulation of nature sunlight. According to their clinical research, using simulated sun light to support waking user up is effective.

This project adopted the idea of tracking user’s movement from Sleep Cycle and using light simulation to assist waking up. As both the products have not published their design details there is no way to figure out if this project intrude any of their patents. A very important motivation of this project is that, to the best of the two team members’ knowledge, there is currently no product can provide these two functions at the same time.
This project will only be used as a course final project and no marketable final product will be produced. However, if any related individual or company consider this is an intrusion of their patents, please inform any one of the authors.
In the demonstration video, the recorded music was a “Minions” ringtone bought from iTunes Store. If this part intruded any copyright, please also contact any member of this project to delete it.

A very important function of this project is recording and playing sounds. The sound can be recorded by a microphone, amplified and send to the internal ADC of PIC32. Then the data can be stored for playback. When playing back, the stored data will be send to the internal DAC(Vref) and output to an active speaker. Consider the limited pins and storage inside PIC32, the dedicated sound chip is adopted.

Relationship of our design to available standards

To the best of our knowledge, there is no available standards related to this project.

First of all, this SWR meter in this article is not exactly homebrew, as I based the circuit on the...