If you are a beginner to Raspberry Pi and were looking for a simple hardware project, then look no further. This tutorial will show you to develop a python based robot which avoids obstacles and navigates freely.
Obstacle avoiding robots are fairly common and easy to make. Here, you can use this project to add object avoidance functionality to your robot. Or simply use it to start messing around with python and the hardware peripherals on Raspberry Pi. This system uses IR modules to detect objects, but we will get to the technical side later. So, if you have a raspberry pi and want to build something based on hardware using it, just scroll down and have fun :). Check out the video at the bottom to see how the raspberry pi robot works. And if you are a true beginner, you can always use our free eBook on Raspberry Pi and Arduino to get started from step 0. You can also read this tutorial on Basic Linux Commands to familiarize yourself with the Raspberry Pi terminal. 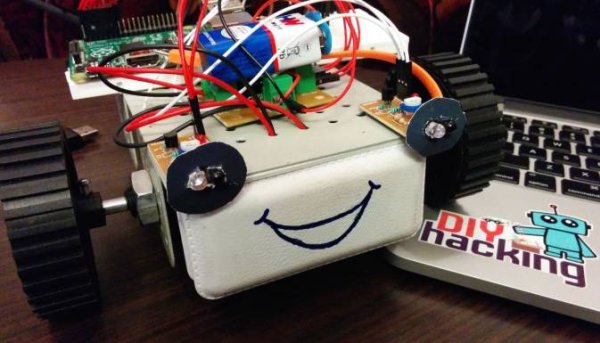 How Does it Work?

The entire working of this robot is really simple, nothing to sweat about 🙂 The whole system avoids colliding into obstacles thanks to its onboard sensors. Here, this robot uses two IR sensor modules which can detect objects within a range of 5-6cm. This sensor outputs a digital LOW (0V) signal when there is an object within its range. And outputs a digital HIGH (5V) signal otherwise.

So how do these IR sensors work? IR stands for Infra Red, which is a wavelength of light not visible to the human eye (but can be seen through our smartphone cameras!). These modules consist of a pair of receiver and transmitter IR LEDs. When an object gets in front of the IR sensor, the surface of the object reflects a part of the IR light back to the receiver. Thus, the receiver then outputs a LOW signal notifying that an object is in front of the sensor.

These sensors are wired to the GPIO input pins of the raspberry pi. The pi then using a python script checks whether the GPIO pins connected to the IR sensor modules goes low. If it does go low, then it commands the DC motors to move in the reverse direction first and then turn. Moreover, this robot is initially activated when we push the button on the breadboard, after which the raspberry pi commands the DC motors to move forward via the L293D driver board. You can check out the demo video at the bottom of this page to see how this robot works.

For more detail: How to Build Your First Robot With Raspberry Pi

Controlling a motor is one of the most exciting things you can do with your Raspberry Pi. Motors are power-hungry...