ESP8266 boards are pretty neat, but if you just bought one (And why wouldn’t you for only $5?) and have realized that you don’t have any obvious means (3.3V TTL USB serial device) to communicate with it, you can talk to it directly with a Raspberry Pi. Both use 3.3V signaling, so no level converting is required.

Raspberry Pi desktop setup (just about any Pi should do, but with power, keyboard, screen, etc. network access is a plus) 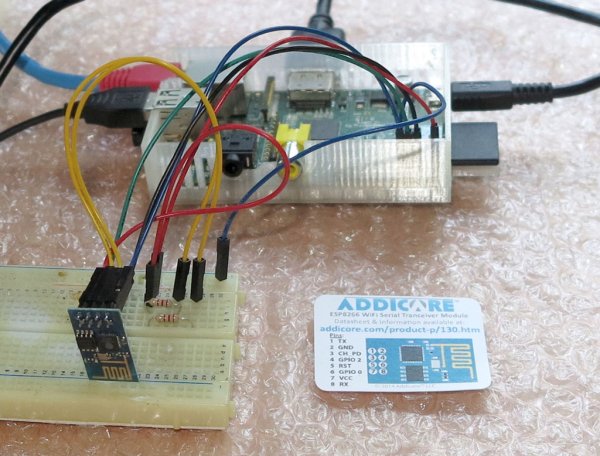 Some jumper wire and nipper/strippers

Solderless Breadboard (or You can solder this instead)

The process is roughly two steps,

Step 1: Wire them together

With the power off, connect the 3.3V and ground pins to one another. Similarly connect the RX to TX and vice versa. You will also want some pull down resistors and optionally a reset button. I’ve included a Fritzing diagram (above).

Boot up the Pi and with super user privs make some edits (e.g. “sudo nano”). 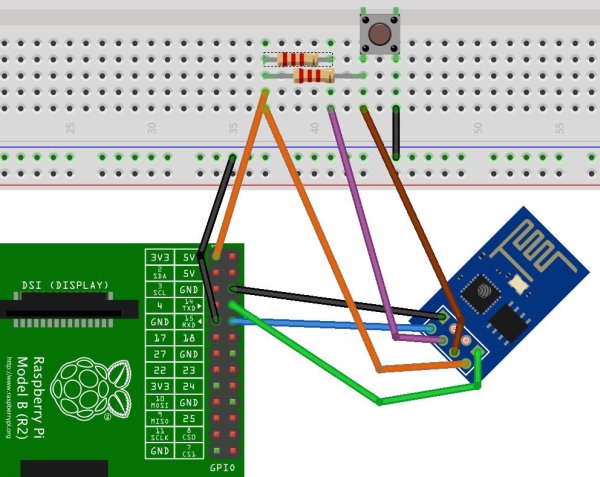 Connect to the serial port
You should now be able to interact with the ESP8266 via a terminal emulator program. I suggest GNU Screen for this (“sudo apt-get install screen”). Screen passes through your keystrokes unless you start with “CTRL-A” in which case you can then make screen do things. For example “CTRL-A” then “k” will close (kill) the session. screen /dev/ttyAMA0 115200 (the speed may vary depending on your ESP8266 board) (you may need to sudo this too, depending permissions) You can now send your ESP8266 “AT” commands. You’ll still need “return” and “CTRL-J” after each one, though.

Don’t mess with the wires while power is on. Shutdown the Pi (“sudo shutdown -h now”) and wait for any blinking LEDs to stop and disconnect power before trying to connect/disconnect wires.

For more detail: Connect an ESP8266 to your RaspberryPi

The first step of building the Raspberry Pi-powered speaking doorbell is building a simple input circuit. The purpose of the...