I mainly use Kodi for my local media, and currently, use the new Amazon Fire TV 4K as it supports Dolby Vision. Relying on Wi-Fi when playing 4K movies irks me, so I am on the lookout for an alternative. 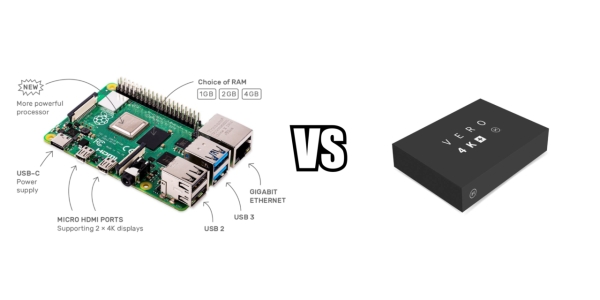 The Vero4K running OSMC is currently classed as the best Plug n Play device for 4K HDR on the Kodi forums, this is then followed by the ODROID N2 running CoreELEC Kodi Leia. I don’t fancy the older Vero4K due to 100Mbit ethernet, but the newer Vero4K+ has gigabit so could fit the bill.

With the launch of the Raspberry Pi 4 Model B this could shake up the market for affordable 4K players. The new device has had a massive upgrade including a new much more powerful Cortex-A72 based CPU, a new VideoCore VI 3D GPU running up to 500 MHz, and proper gigabit ethernet.

Priced at just £44 for the 2GB model, the RPi4 is a very tempting prospect compared to the £119 the Vero 4K+ sells for. The Vero does include 16GB of MMC memory, so this factors into the price, but the RPi is still much cheaper.

This is where issues arise for the RPi at the time being. The new chipset requires a lot of updates. The LibreELEC team launched LibreELEC (Leia) 9.2 ALPHA1 when the new device launched.

Currently, the statement from LibreElec states:

In this initial release, 1080p playback behaviour and performance on the 4B are broadly on-par with the previous 3B/3B+ model, except for HEVC media which is now hardware decoded and massively improved. New 4K video capabilities still have plenty of rough edges to be smoothed out, but the Pi Foundation developers have been pushing fixes to the Alpha test team at a phenomenal rate over the last month and that will continue as the userbase expands.

The 4B hardware is HDR capable, but software support has a dependency on the new Linux kernel frameworks merged by Intel developers (with help from Team LibreELEC/Kodi) in Linux 5.2 and a kernel bump will be needed to use them. Once the initial excitement and activity from the 4B launch calms down, serious work on HDR and transitioning Raspberry Pi over to the new GBM/V4L2 video pipeline can start.

I bought the RPi4 2GB at launch, and I was not been able to get it working with my local 4K files using the default installation.

With LibreELEC 9.2 Alpha1 I could manually set the resolution to 3840×2160 and confirm it works with my TV, but the refresh is appeared to be limited to 30 Hz.

With H.265 4K videos, the playback was a little hit and miss, some things played OK, while others were a little choppy.

With 4K H.264 and VP9 things played, but were mostly unwatchable, which is to be expected as this is not supported.

I will do some more testing during the next week with some more videos and try to see what it is working and what is not.

So for the time being, the new RPI 4 is not great for a 4K box. The beauty of Raspberry Pi computers is the massive developer base, and over the next few months, things will improve considerably, and this could end up being one of the best options on the market.

Use a Raspberry Pi to make your "dumb" car smarter! Story INSPIRATION I love the idea of smart cars, but...