The DS18B20 is a rather useful sensor because you can read more than one of them using the same GPIO pin. The Raspberry Pi is able to recognise the input from each separate sensor. This system is called “1-wire”, although the sensor still needs power and GND connections.

There are red and blue rails for power (+ve, red) and ground (-ve, blue). All wires plugged into those rails are connected together, as shown by the red and blue wires on the left hand side. Most breadboards have two sets of power rails, allowing you to power different parts of a circuit with different voltages. 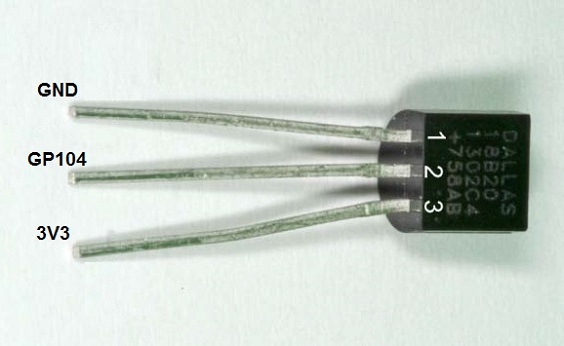 On the main part of the breadboard you have rows of connections with a gap in the middle. The two sides are not connected to each other. Anything you connect to a row on one side is connected to all the other wires in that row on that side (as shown by yellow and green wires).

The DS18B20 sensor has three pins which are connected as follows:

The 3V3 and GND wires could be connected directly to the sensor pins, but we’re using the breadboard power (red) and GND (blue) rails because this makes it easier to add more sensors later.

Reading the temperature with the Raspberry Pi

Check you circuit is wired correctly and the Raspbian SD card is in the Raspberry Pi, then power up the Pi.

Login, using pi as the login id and raspberry as password, then type…

The first time you run, it will load the drivers, which takes a few seconds. Then you should see a temperature readout updated every couple of seconds.

• If you put your finger on the sensor, the temperature readout will slowly rise.

• If you breathe hot air on it, it will rise a bit faster.

• If you blast it with a hair-dryer it will go much higher, much faster, and stay high for longer.

• An ice cube wrapped in kitchen paper can quickly make the temperature readout go down.

Every once in a while the program reminds you how to exit (CTRL+C).
When you’ve finished with that, it’s time to add another sensor.

This could easily be used, with longer wires, to form the basis of a temperature control system or a weather station showing indoor and outdoor temperatures.

It’s best to do wiring with the Pi powered down, so shut it down by typing

After about 10-20 seconds the LEDs on the Pi stop blinking and you can pull out the power lead.

Now we need to add another sensor to our breadboard circuit. No need to change what we already did, we’re just adding a sensor, a resistor and three wires.

Notice that a wire connects the middle pin of each sensor. These are both read from the same pin (GPIO4) on the Raspberry Pi.

Once your circuit is correct, power up the Pi again, Login, using pi as the login id and raspberry as password, then type… 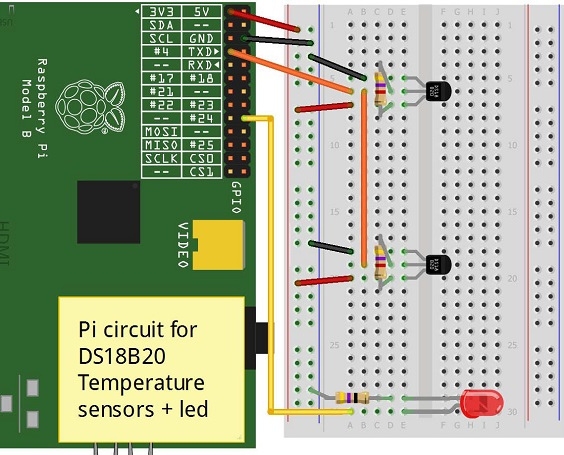 This time, after loading the drivers, it should show you the readout from both sensors.

You can manipulate them as before to prove that they are working independently. You might occasionally get the odd spurious reading (e.g. 0.06) but usually it will only be a one-off.

It’s advisable to power down the pi again at this point, as before.

We need to add:

Dual Project: AirPlay-Pi and new life for an old radio

Hey, Welcome to my first ever post on Instructables! The Project you're about to read over is setting up a...