Relay I/O Board is widely used in applications of smart home project. In this article, I will detail how to control the Relay I/O board using Raspberry Pi with Raspberry Pi Universal Expansion Board via internet. The codes and schematic diagrams used in this article was listed at the end of this article.

The CPLD on the Raspberry Pi Universal Expansion Board can be used to map pins between modules. For this project, we want to map pins as following diagram Fig.1. 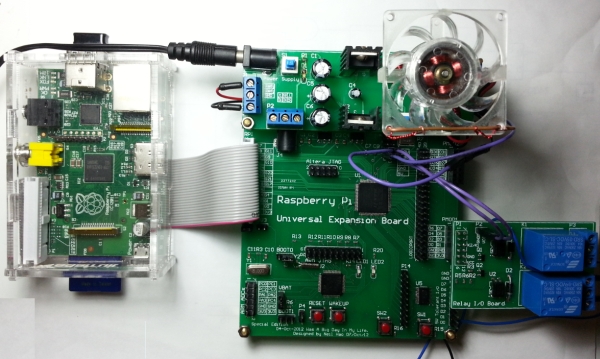 We can flash the design into the CPLD right now.

Creating a new .c source code file RelayIOBoard.c as the driver of the Relay I/O board:

We need to add following commands to the Shell() in CommandShell.c:

For convenience, the Firmware STM32_Relay_1.0.hex needs to be flashed into the MCU. The Firmware will host a Command Shell on UART1. It also includes the driver of the Relay I/O board.

Connecting Relay I/O Board to the Pmod1 socket on the Raspberry Pi Universal Expansion Board. A cooling fan may be controlled by the relay as following figure.

For more detail: Raspberry Pi with Relay I/O Board