At Kaazing, we have been experimenting with using a smartphone as a remote control for quite some time now. Those familiar with our demos may have seen our Zing-Pong demo (which is a “Pong”-style game using smartphones to control the paddles over WebSocket) or our Racer demo (which is a 3D Formula One car rendered in WebGL as a Chrome Experiment, and remotely controlled with a smartphone). These demos, along with the other demos we’ve created with Kaazing’s platform, use no plug-ins. You simply point a browser on your computer to the address of the object you want to control (for example, the gorgeous Formula One car rendered in WebGL) and a browser from your smartphone to the address of the remote control (an ID we generate for you). Once connected, you just…go!

A couple of our Visionary Zingers, Prashant Khanal and David Witherspoon, then experimented with communicating with a Raspberry Pi using WebSocket–or, more specifically, using Kaazing’s JMS-over-WebSocket Gateway to tell Raspberry Pi to turn on and off a lightbulb. When the lightbulb turned on in this experiment, another lightbulb turned on: could we in fact turn a remote, radio-controlled car into a remote, WebSocket-controlled car? By controlling the car over the Web, could we control the car from another room? From another continent? 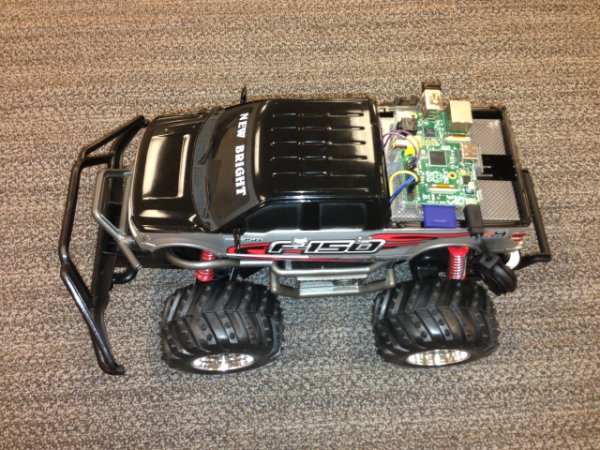 Let’s first take a closer look at the Racer demo. The Racer demo uses the reflector pattern: where we connect devices through a WebSocket server, thus simulating peer-to-peer connectivity, a very easy-to-achieve task using pub/sub. When we developed the Racer demo, we walked through the steps to build it in The Simplest Way to Use Your Smartphone as a Game Controller: A WebSocket Race Car Demo. By examining how to use pub/sub concepts to control a virtual car, it’s not so farfetched to consider doing the same with a radio-controlled car.

After working with the Racer demo, we knew what we wanted to achieve: controlling a “real” car (or at least a good-sized monster truck model) with a simple web app on a smartphone. Something like this, for example.

In just a few hours of hacking and experimenting, we turned this radio-controlled car into a WebSocket-controlled car. Don’t worry, no actual cars (or bunnies) were harmed in the making of this demo, as you’ll see as we walk through the hardware and software we used. 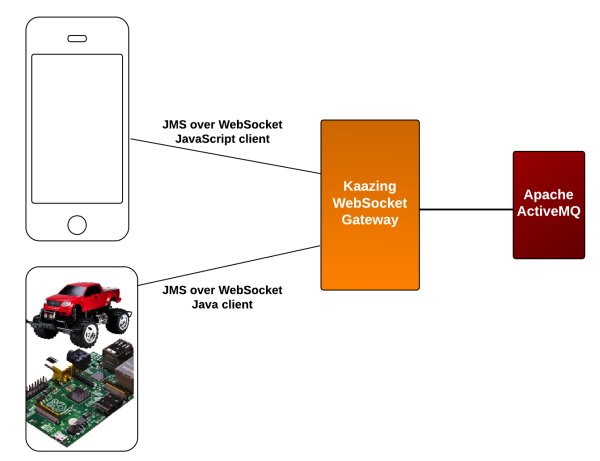 We decided to hide all the electronics in the body of the car, but wanted to have the Raspberry Pi accessible and more importantly, visible. It’s sitting on the truck’s plateau, lightly taped to it, so it doesn’t fall off as the truck accelerates and comes to sudden stops (read: bumps into things).

On the right you can see the WiFi plugged into the top USB port (blue LED). On the left, you see the blue SD card. The GPIO ports are on the top left, connected to drive the two motors and the lights of the truck. The Raspberry Pi is powered through a micro USB port on the bottom left, leveraging a smartphone quick charger battery.

Under the “hood”, you can see the relay, and the breadboard connecting to the Pi, and the motors of the truck, as well as the front LEDs.

To enable the Raspberry Pi to receive WebSocket messages from the browser client, we had to write some logic that runs on the Pi.

The two clients, the smartphone remote control, and the code running on the Raspberry Pi, communicate with each other via WebSocket. In addition to JavaScript clients, Kaazing supports Java, .NET, and Flash/Flex clients. We chose the Java client for the Pi. The communication between these clients is seamless. The back-end message broker, which provides the messaging services is Apache ActiveMQ, but could be another JMS message broker like TIBCO’s, Informatica’s, or IBM’s, as well.

For more detail: Remote Controlling a Car over the Web. Ingredients: Smartphone, WebSocket, and Raspberry Pi.

Back in Black – a DIY raspberry pi Boombox: Wire it Up – Power

Power The BinB boombox has a different power setup from the prototype - it can be battery powered or AC...