Yesterday, I built a very simple DIY solar-powered USB charger for my TP-link 10400mAh USB Power Bank. All I needed was a 6V/3.5W solar panel and the TD1410-based 5V buck converter module. I bought both of them on Aliexpress for less than $8. 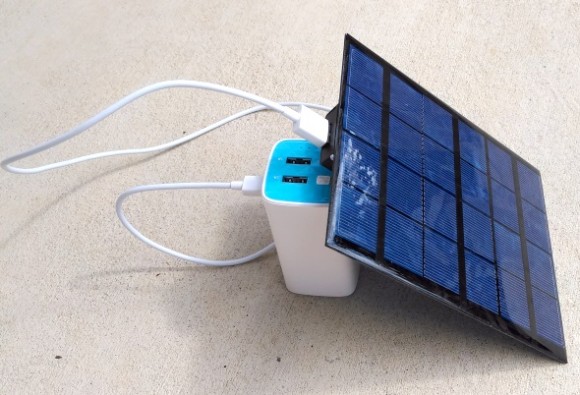 It was one of the easiest projects I built. All I needed to do was to connect the input of the 5V step-down buck converter to the output of the solar panel using two wires.

For 5V output from TD1410, the input voltage can range from 5.5V to 20V (from the datasheet). I measured the solar panel open-circuit voltage under sunny conditions to be ~ 6.5V. Under the load of 200 mA, the solar panel output voltage was reduced to ~6.0V. The TD1410-based 5V buck converter module that I purchased on Aliexpress already has a diode at its input for polarity protection. So I didn’t need any extra diode for the solar panel output as it directly goes to the input of the buck converter. The nice thing about this buck converter is it has a USB-A female port for output, which is same as found in standard USB chargers. It also comes with a plastic enclosure (see pictures below).

The USB output voltage from the buck converter was measured to be 5.05V using my TENMA multimeter. I could even charge a Xiaomi Redmi Note 2 smartphone directly from the USB port under full sun conditions. I measured the charging current was ~200 mA. If the sky is partly cloudy, the solar panel might not supply the adequate current for charging the smartphone directly (of course, it also depends upon the smartphone).