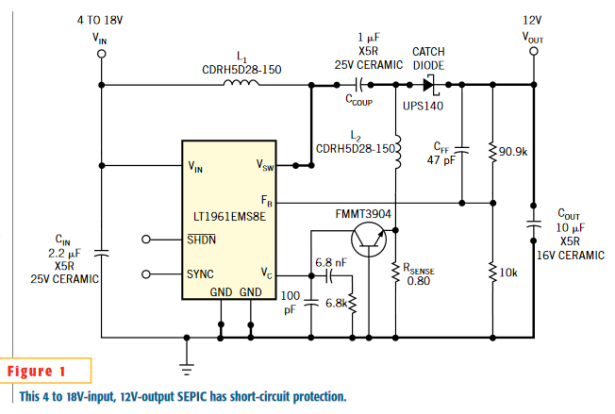 In certain dc/dc-converter applications, on-chip, cycle-by-cycle current limit may be insufficient protection to prevent a failure during a short circuit. A nonsynchronous boost converter provides a direct path from the input to the short circuit through the inductor and the catch diode. Regardless of current-limit protection in the IC, when a short circuit exists in the load, extremely high currents that flow through the load path can damage the catch diode, the inductor, and the IC. In a SEPIC (single-ended, primary-inductance-converter) circuit, the coupling capacitor breaks this path. Thus, when a short circuit exists in the load, no direct path exists for current to flow from input to output. However, if the required minimum on-time is less than the application-specific duty cycle, the inductor and, thus, the switch current can rapidly increase, causing IC failure, input-supply overload, or both. Even in certain buck-regulator applications, duty-cycle limitations sometimes keep the switch on too long to maintain control during an output short-circuit condition, especially at very high input voltage with extremely high-frequency ICs. A single-transistor approach protects the SEPIC circuit from short-circuit fault conditions by pulling down the VC pin (the output of the error amplifier) when the inductor current starts to run away during an overload or short circuit in the load (Figure 1).

Pulling the VC pin low forces the IC to stop switching, skipping minimum on-time switch cycles, and allowing the current in each inductor to ramp down. During a short circuit, the peak current in L1, which decreases because of the limited number of switch cycles, and the peak current in L2 sum up to equal the peak current in the switch, which is less than the 1.5A limit of the LT1961EMS8E. Figure 2 shows the short-circuit input and output currents at different input voltages. Figure 3 shows the maximum load current versus input voltage. The average current in L2 is equal to the load current and is a maximum of 600 mA under all load conditions. If the sense resistor sees 800 mA, it knows that an overload condition has occurred and tells the transistor to protect the circuit.