There’s something about Frequency Modulation (FM) synthesizer chips that appeals to a large audience. That’s one of the reasons behind [René Ceballos]’s XFM project, aiming to duplicate on an FPGA the sound of pure-FM synthesizer chips of the past such as the Yamaha DX series, OPL chip series and TX81Z/802/816. The result is a polyphonic, 32-voice, 6-operator FM synthesizer stereo module. 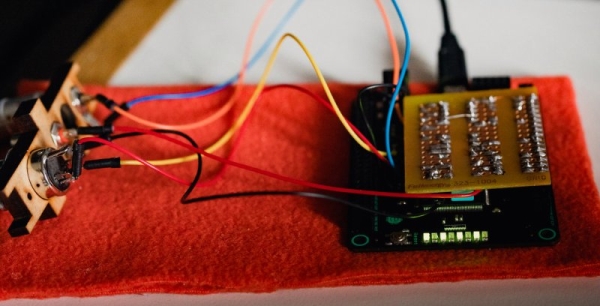 The project page goes into a lot of detail about the design choices which ultimately led to XFM being implemented on an FPGA, instead of using a dedicated DSP or MCU. Coming from the world of virtual synthesizers running on PCs, [René ]’s first impulse was to implement something on a Raspberry Pi or equivalent. Unfortunately these boards require a lot of power (ruling out battery-powered operation) and can hardly be called real-time, which led [René ] to abandon this attempt.

The design choice against the use of an MCU is simple: though capable of real-time processing, they lack the necessary power to make them a good choice for audio-processing. Working through the calculations to determine what kind of processing power would be needed, it was found that around 650 MIPS would be needed, a figure which most MCUs struggle to achieve a fraction of.

As one of the further requirements for XFM was that it should be as cheap as possible, this ruled out as too expensive the DSP chips which do have the power and hardware features needed. The component chosen was a Xilinx Spartan 6 FPGA, which though somewhat infamous and shunned in FPGA circles turns out to be a very economical option for this project.

Picking the Mojo V3 with the Spartan 6 XC6SLX9 that has 16 DSP blocks as platform, [René ] then created an add-on board for the MIDI and SPDIF interfaces, along with an EEPROM for program memory and a dual sigma-delta 16-bit DAC implemented using discrete components.

The result is pretty impressive as you can hear for yourself in the below included video, with a brief look at the XFM system in action as well.

Being a mostly open design, the design files and software are available via the website for anyone who wants to build their own XFM system, assuming they can use the bit file for the currently supported FPGA boards. Unfortunately the Mojo V3 board has been phased out at this point, but [René ] has indicated in a response to us that he has ported the HDL to the Numato Mimas and CMOD A7 boards and will make the bit files for those platforms available in a few weeks.

There is talk of perhaps doing a crowdfunding campaign for a custom board or even an ASIC version in the future, which is the reason for not open sourcing the HDL.

Source: XFM: A 32-VOICE POLYPHONIC FM SYNTHESIZER ON AN FPGA

Creoqode’s Lyra is a handheld game console featuring a 5 inch display surrounded by game controllers. It looks a bit...