I want to deliver sound from my Raspberry Pi’s (RPi) Audio Output 3.5mm jack.  I’ll need to get audio drivers working on Audio Out, and to test it, I’ll need some sound files and players.  I’m choosing the Advanced Linux Sound Architecture (ALSA) drivers because its widely supported and because ALSA not only provides audio but  Musical Instrument Digital Interface (MIDI) functionality to Linux.   I’ll also be using the popular command line MP3 players, mpg321 and the WAV player that comes with ALSA, aplay.

To get things going, I installed ALSA, a MP3 tools, and a WAV to MP3 conversion tool via the following commands: 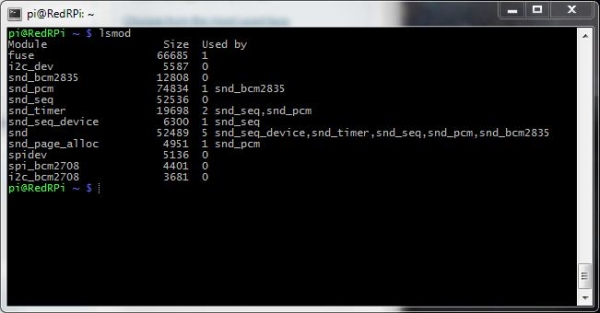 Reboot the RP and when it comes back up, its time to load the Sound Drivers.  This will be done via loadable kernel module (LKM) which are object file  that contains code to extend the Linux kernel.  lsmod is a command on Linux systems which prints the contents of the /proc/modules file.

The snd-bcm2835 module appears to be already installed. RPi has a Broadcom  BCM2835 system on a chip (SoC) which is a High Definition 1080p Embedded Multimedia Applications Processor.  snd-bcm2835 is the sound driver.  If  lsmod doesn’t list the snd-bcn2835 module, then it can be installed via the following command:

By default, the RPi audio output is set to automatically select the digital HDMI interface if its being used, otherwise the analog audio output. You can force it to use a specific interface via the sound mixer controls.  amixer allows command-line control of the mixer for the ALSA driver.

You can force the RPi to use a specific interface using the command amixer cset numid=3 N where the N parameter means the following: 0=auto, 1=analog, 2=hdmi.  Therefore, to force the Raspberry Pi to use the analog output:

With this done, you should be ready for a simple test.  Plug a speaker into the (RPi) Audio Output 3.5mm jack.  I used a simple battery powered iHM60 iHome speaker.  The jack will not deliver much power, so the speaker needs to be powered.

To test the RPi audio, you can play a WAV file (download this … excellent for user-error notification) with aplay, mpg321 for MP3 files, or use the speaker-test command if you don’t have a WAV/MP3 file.

More on the ALSA Sound Drivers and Utilities

While ALSA is a powerful tool, it documentation appears is very weak.  Also, it appears that the capabilities of ALSA drivers and utilities are very  dependent on the hardware used.  The best sources of documentation that I found include Advanced Linux Sound Architecture (ALSA) project homepage,  archlinux Advanced Linux Sound Architecture, and ALSA-sound-mini-HOWTO.

You can find useful information in the directory /proc, which is a “virtual” file system (meaning that it does not exist in real life, but merely is a mapping to various processes and tasks in your computer).

The RPi built-in sound chips don’t have a “master volume” control, and as a result, you must control the volume via software.  I guess the RPi views itself as a preamplifier (preamp) and volume controls would be supplied down stream.  ALSA provides a software volume control using the softvol plugin.

The MP3 player mpg321 can convert MP3 files to WAV files but the WAV player, aplay, can not do a conversion.  To make a MP3 file from a WAV file, you’ll need the tool lame.

While you can get ALSA working on the Raspberry Pi, it appears only partly supported, maybe buggy, and poorly documented.  If you just want to simply get sound out of the device (like I do), you’ll be fine.  But if you have some desire to do some sound processing with ALSA, your likely to be very frustrated.

This specific post has gotten about 25% of all the viewings of my blog. I’m not sure why this is the case but I speculate that there are many people tying to make RPi into a Media Player and looking for answers to their technical problems.

At this point in time, others have done some additional postings and they are more instructive than my post. You should check out:

Source: Getting Audio Out Working on the Raspberry Pi